Apologies for the lack of posts recently; work and travel-planning has been taking up all of my time. Anyway, it’s currently 10.17pm on a Sunday evening and I’m in the mood to tell you a bit more about mine and Kanna’s trip to Taiwan all the way back in March, so grab a cuppa and some snacks and let’s get crackin’.

On Friday morning, we decided to pay a trip to Taipei 101, Taipei’s iconic tower. Formerly known as the Taipei World Financial Centre, the building was officially classified as the world’s tallest in 2004 until the completion of the Burj Khalifa in Dubai in 2009. 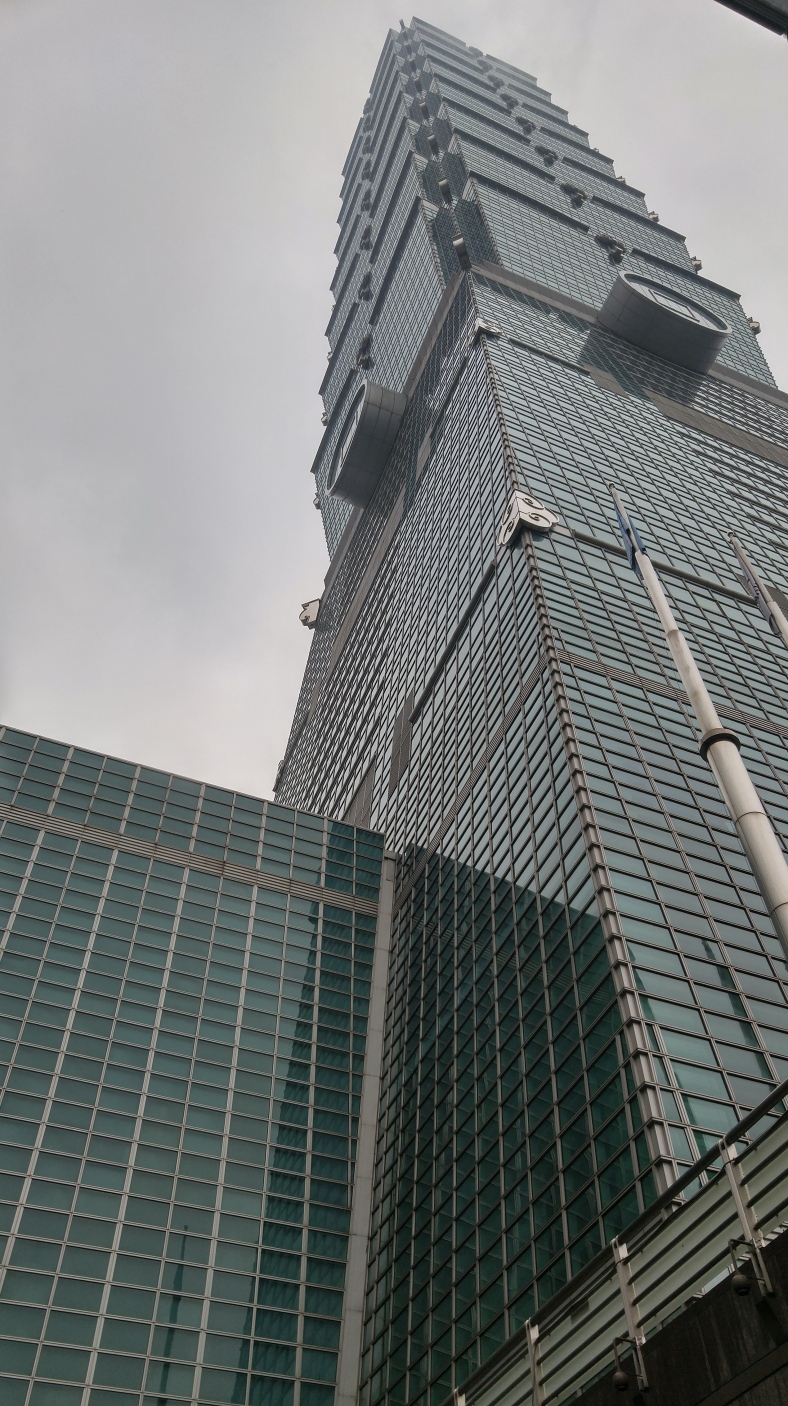 Unfortunately, as we arrived, it was pissing it down, there were huge queues and it was pricier than we expected it to be. We decided to give it a miss and headed off in search of bargains instead.

I had done a little online research beforehand and came across WuFenPu, the largest garment wholesale market in Taipei.

Although there were the odd few nice items, I wouldn’t recommend a visit as I found most of the clothes quite tacky and not great quality. 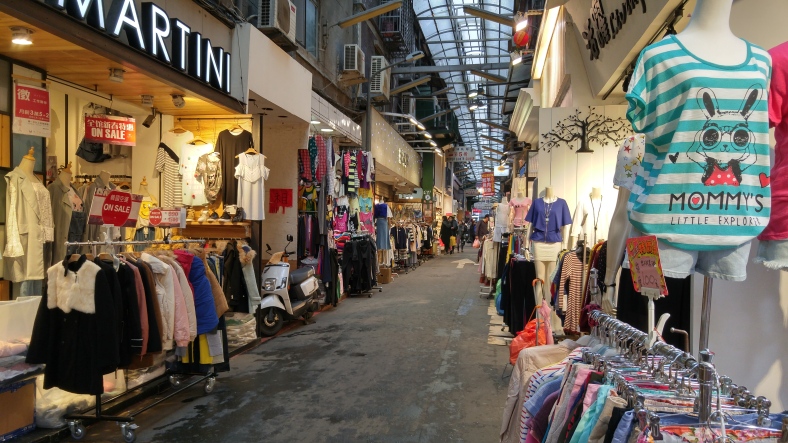 I sent Ryan a photo of this shop named after him and he wasn’t impressed with the clothing choices either. 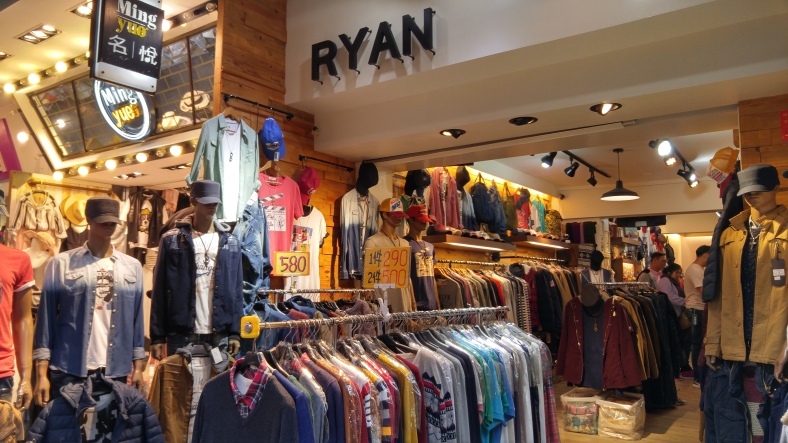 Our next stop was the Taipei Fish Market which was redesigned in 2012 and reopened as the “Addiction Aquatic Development”. The space was originally a morning fish market that catered to locals but its transformation into a sleek and modern foodie paradise means that it now also attracts visitors to buy fresh seafood that can be cooked and eaten on the premises or taken to go.

This outdoor restaurant looked like it served some yummy barbecued seafood.

The layout of the market is simple and the area is very open, clean and organised with large tanks for different fish, shellfish and crabs.

After doing a little research online for this post, previous visitors advise you to head straight to the sushi bar area to grab a number as there might be a wait. While waiting for food, you can check out the rest of the food in the chic supermarket with the rows and rows of sushi, sashimi, alcohol, fruit and veg, desserts and Japanese ceramics.

The restaurant that I really wanted to try was the seafood and raw bar as the food looked beautiful and so fresh! It was also cool to be able to watch the chefs do their thing in the open kitchen. 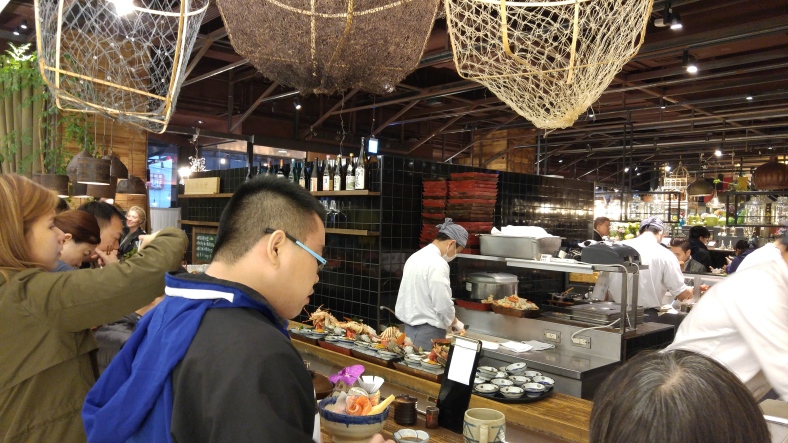 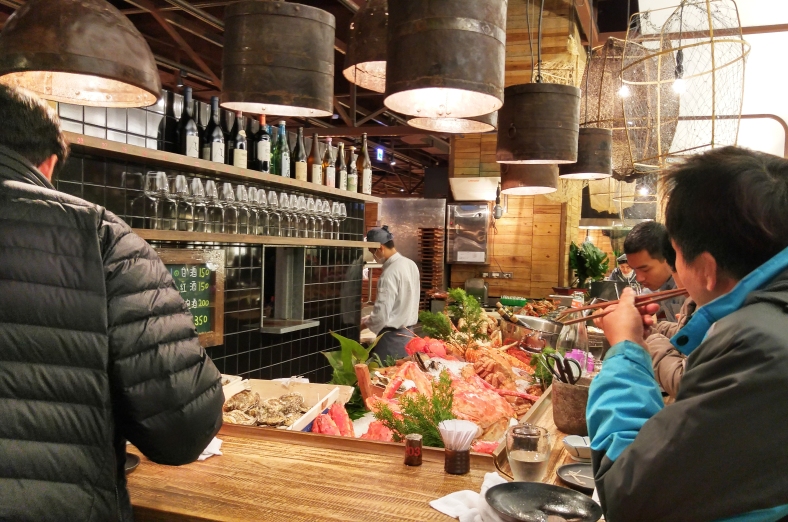 As Kanna and I couldn’t read Chinese or speak Putonghua and there were no photos on the menus, we decided to try some supermarket items instead and took them outside to eat at a standing table.

Kanna went for the soft shell crab rolls which were delicious and I had the breaded scallops. They were so big and pretty yummy but would have been better if they were hotter and accompanied by a dollop of chili sauce 😉

Before we left, we also came across the hotpot restaurant upstairs which is the only restaurant in the building that takes reservations. I will definitely be back to try it, even if I can’t read the menu, haha!

On the way to our next destination, Dihua Street, we came across Ningxia Market, a small and quick introduction into night market life. 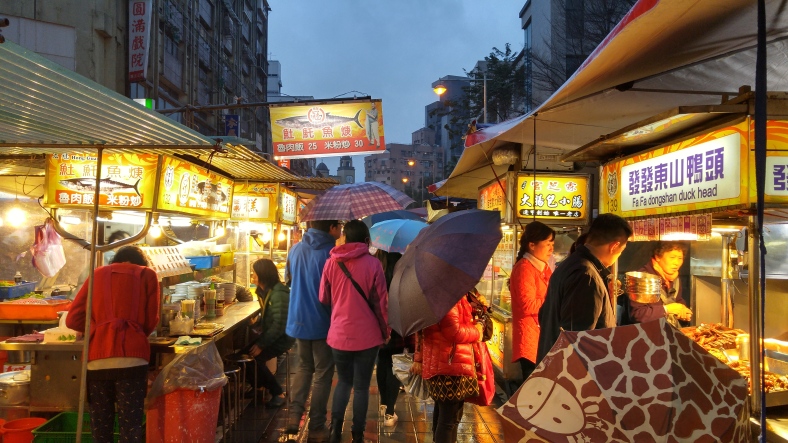 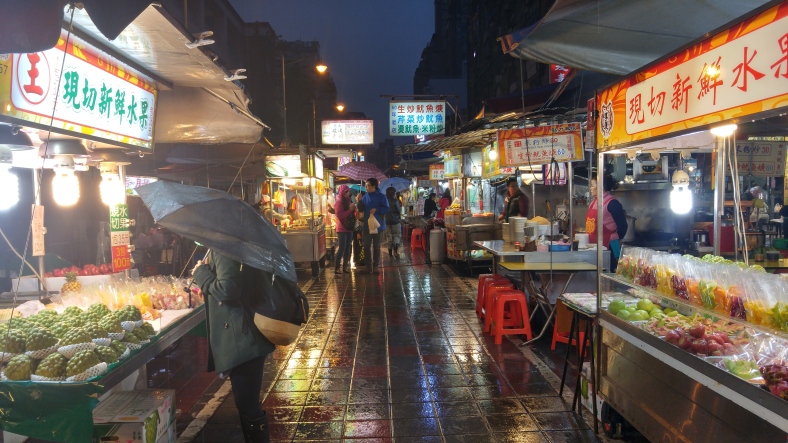 As I was feeling rather peckish and a little disappointed that we didn’t try more seafood at the Addictive Aquatic Development, I ordered some fresh clams cooked in rice wine and ginger. Unfortunately, it was still pissing it down and their tables and chairs were all wet so we just found a dry spot next to a waffle shop a little way down from the market to eat.

The clams were juicy and delish! 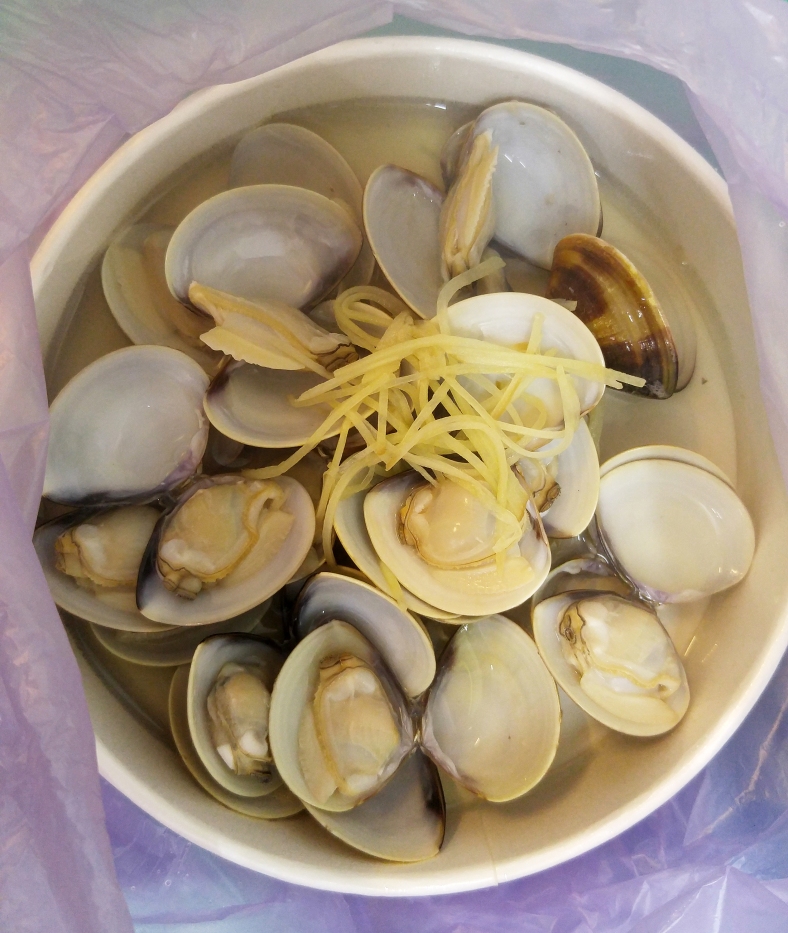 Our next stop was Dihua Street which has long been known for its Chinese medicine shops and fabric market. According to Lonely Planet, the street has also become a magnet for young entrepreneurs to breathe new life into the neighbourhood with cafes, restaurants, art studios and antique shops.

Although I had expected it to be a cool mix of old meets new, like Sheung Wan in Hong Kong, we only seemed to witness the old. However, it was still an interesting experience to visit Taipei’s most historically diverse street and we both bought some delicious-smelling passionfruit tea leaves. 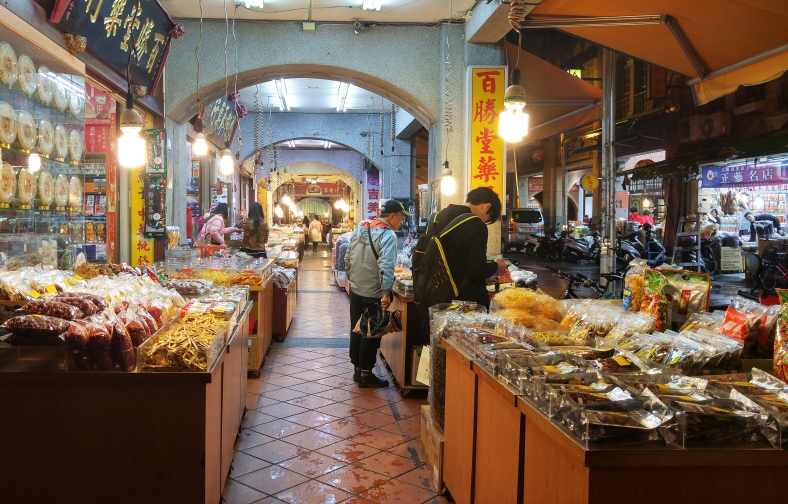 After heading back to the hotel for a rest, we made our way to the final destination of the day: Shilin Night Market.

This is considered to be the largest and most famous night market in the city so I was excited to check out what it had on offer.

Plus, I was bloody starving!

There were lots of awesome food stalls with side streets lined with shops selling souvenirs, clothes and random bric-a-brac.

Check out these awesome socks!

Kanna tried the candied tomatoes that also contained a dried fruit in the middle.

She enjoyed it but got a sweetness overload after a while!

This is a bit of a weird thing to say: I’m really fussy when it comes to sausages…

…but this one gets a solid thumbs up from me 😉

This is the first time that I’ve had curried fishballs with curry powder as opposed to curry sauce.

Although I prefer the curry sauce variety, this was still yum! 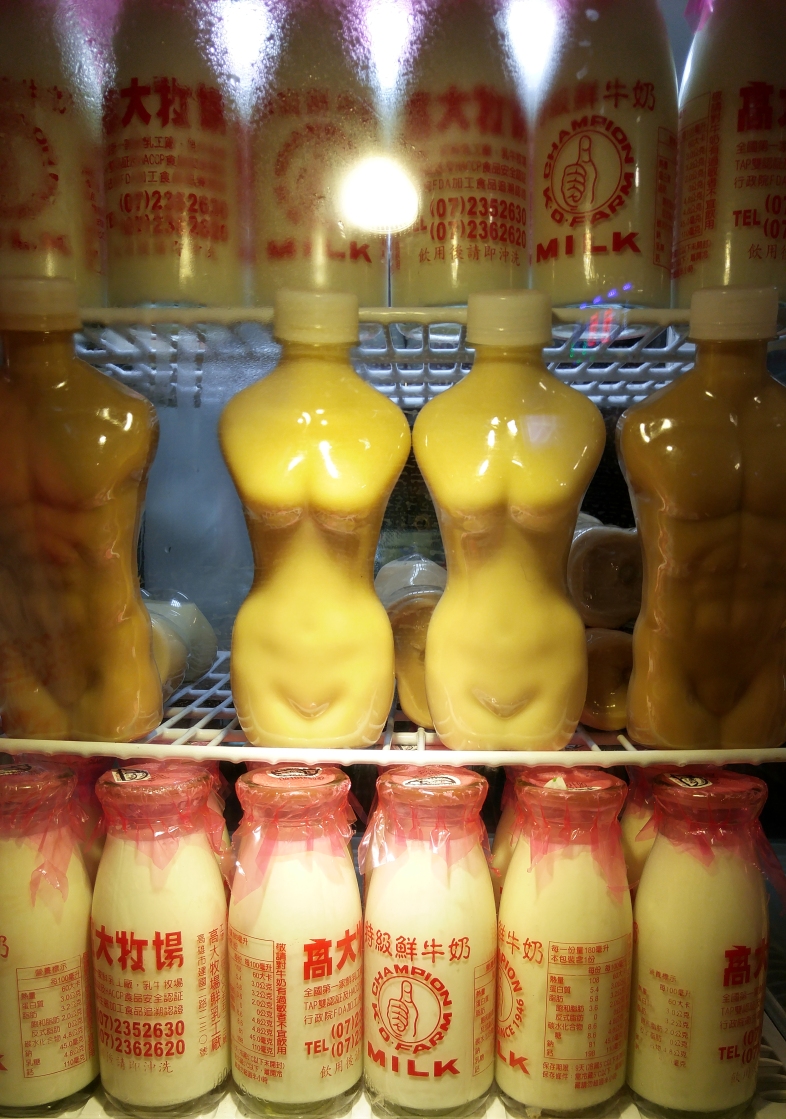 I also tried the famous oyster vermicelli which is a noodle soup popular in Taiwan. I actually thought that this would be like the noodles with soup that we get in Hong Kong so I was surprised when it was served with only a spoon. Nevertheless, I enjoyed the soup and would definitely recommend it!

It’s amazing how much you can squeeze into a day!

As you can imagine, Kanna and I were absolutely exhausted but happy to have ticked so many places off our lists!