As Kanna turned 26 on our first day in Taiwan, I gave her a little gift in the morning and we partied on down to a bit of Bieber.

Once we were ready, we headed to our local MRT Station.

This piece is called ‘Daydream’ by Joyce Ho and Craig Quintero.

“Amongst the hustle and bustle of Taipei, Daydream offers a whimsical break from the monotony of everyday life. Standing in a field of grass, water flows from the bird head covering the young girl’s face. A girl that would never grow up. A pencil that will never write. Caught between motion and stillness, fact and fiction, the surreal sculpture is an invitation to stop and smile, an invitation to dream…”

I mean, it’s definitely a conversation starter and a great way to work out where to take a turn in the station but I’m not its biggest fan. It just seems a bit sad that there’s a naked girl with a bird’s head holding a pencil that will never write…

Anyway, for her birthday, Kanna wanted to visit Tamsui, which she compared to the island of Cheung Chau in HK.

Located at the northern tip of Taiwan, Tamsui is a laidback coastal town named after the Tamsui River (meaning ‘fresh water’). Located along the north coast about 40 minutes from Taipei Main Station, it serves as a quick getaway from busy city life.

The final leg of the journey on the MRT ran past mountains that thick mangrove forests making it feel like a trip well out of town. 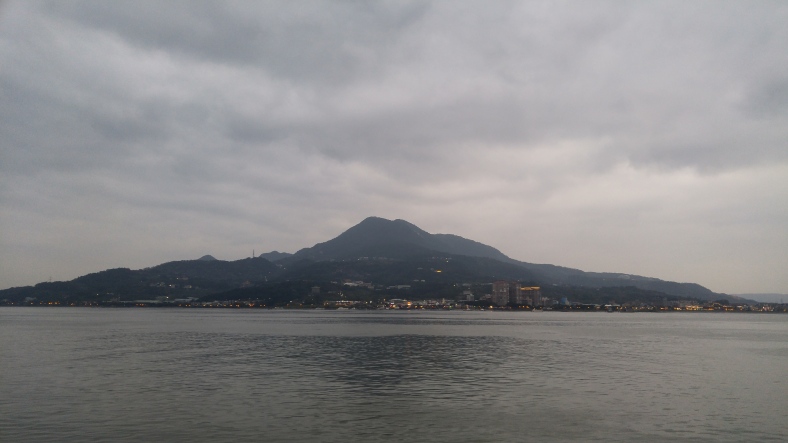 Historically, Tamsui is a significant place in Taipei history as one of the main settlements for the Spanish in the 1600’s and one of the biggest ports in Taiwan in the 19th century.

We also loved the salt and pepper deep fried squid!

It was definitely one of our favourite snacks in Taipei and the ones and Tamsui were especially delicious.

I’d never had squid that thick and tender before!

Visitors can sample Tamsui’s local specialties: A-Gei (crystal noodles stuffed in fried bean curd, served with a mild hot sauce), fish ball soup (balls of fish paste stuffed with meat and garlic served in a light broth), fish crisps (similar to prawn crackers) and iron eggs (eggs which have been repeatedly stewed in a mix of spices and air dried. The resulting eggs are dark brown, chewy and about half their original size). Kanna bought many packs of ‘iron eggs’ as souvenirs.

These originated from a famous stall called ‘Ah Poh Tie Dan.’ The story goes that an old lady called Hwang Chang Mo couldn’t sell her braised eggs and kept boiling and reboiling them for days resulting in the egg whites turning into a hard, chewy, black mass. However locals loved the taste of it so they became really popular.

For more precise details and addresses of popular places to eat in Tamsui, check out Alec’s Travel Guide.

We also passed this interesting-looking museum but we forgot to go back to it!

I guess I’ll just have to pay Tamsui another visit 😉

First selfie of the trip…

The first of many…

Taiwan also has the best selection of socks.

ALL THE TOTORO SOCKS WILL BE MINE!

They also have an excellent range of postcards, cards and stickers – all of which I’m slightly obsessed with, so I LOVE TAMSUI! 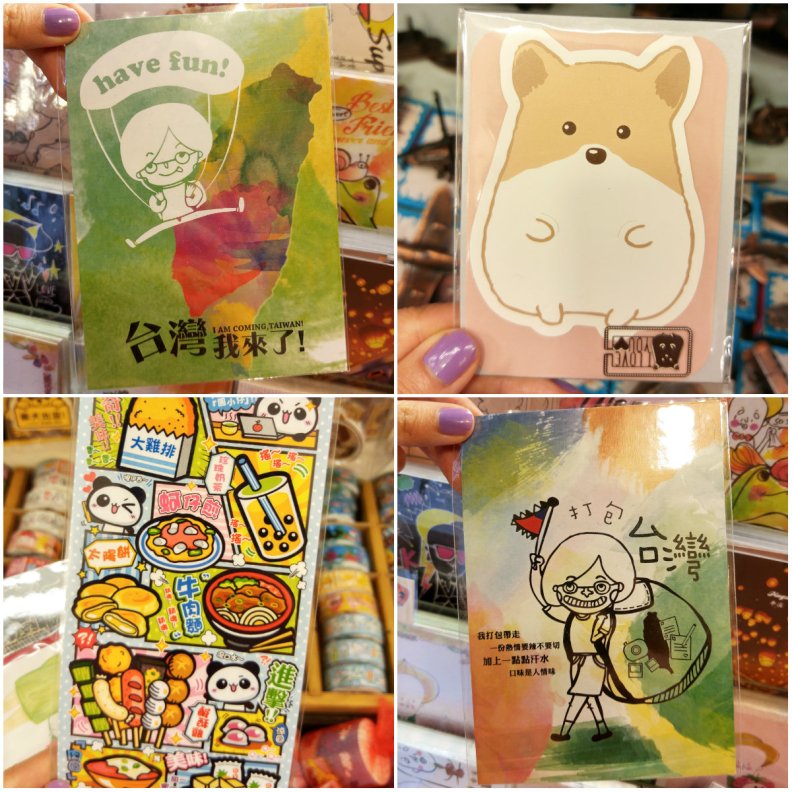 We also came across a cute little chocolate shop which sold lots of different flavoured chocolates, as well as these delicious little strawberry numbers that we bought for a friend’s birthday.

When I gave them to her, she actually thought that we’d bought her strawberry condoms for her birthday so it’s money well spent.

Oh and they taste great too 😉

After a spot of shopping, we decided to find somewhere for lunch…

…passing these adorable macarons on the way!

Unlike Hong Kong, not many places in Tamsui had English menus and neither of us could read Chinese or speak Putonghua. We popped into a little noodle restaurant and just pointed at pictures and what they had out front.

We both ended up with their ‘hor fun’ (flat noodles) and Taiwanese fishballs. I thought that they were just regular fishballs so I was pleasantly surprised to find them stuffed with meat and garlic, SO YUM! Also the noodles tasted like they were freshly made there, with a thicker consistency than those that you usually find in HK. The broth was also much lighter than it’s MSG-filled counterpart in HK. 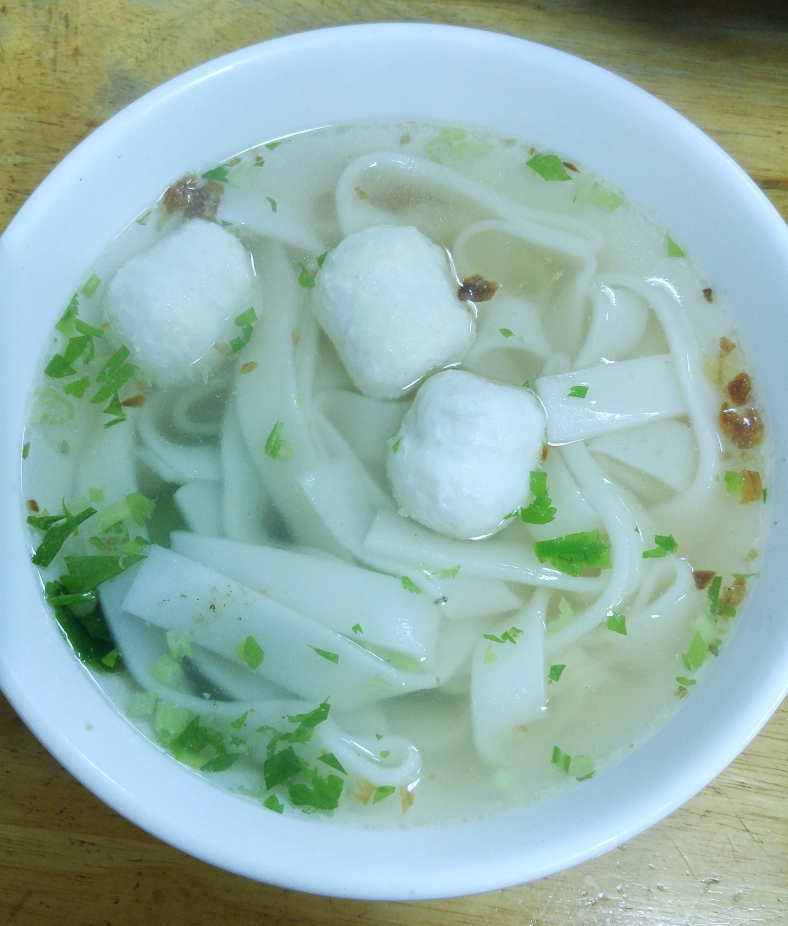 After lunch, we continued to wander, dipping in and out of shops on the way.

For those of you who don’t already know, Kanna’s motto in life is, ‘If there’s a queue for food, we have to join it because it must be good.’

I don’t share this belief simply because although I love food, I’m not so keen on queuing. Nevertheless, it was Kanna’s birthday so it’s birthday girl’s rules 😉

We spotted a huge queue for sponge cake after lunch and swiftly joined the queue.

Tbf, before we could even see the shop, we could smell the buttery aroma of freshly baked sponge cake and we couldn’t resist!

It was alright though as there was some cool artwork to check out while we waited.

After doing a bit of online research, it turns out that there is pretty much always a queue outside this shop. All of the sponge cake is baked on the spot and they only come in 2 flavours; original and cheese. Everything is baked and sold right before your eyes in their open kitchen.

When the sponge is ready, it’s brought to the counter in massive slabs with a perfectly glossy and smooth surface. Each potion is carefully measured with a long metal ruler before being meticulously cute with a long flat knife to great precision. The act of baking and cutting the cake is quite a performance with customers snapping away on their cameras, myself included! 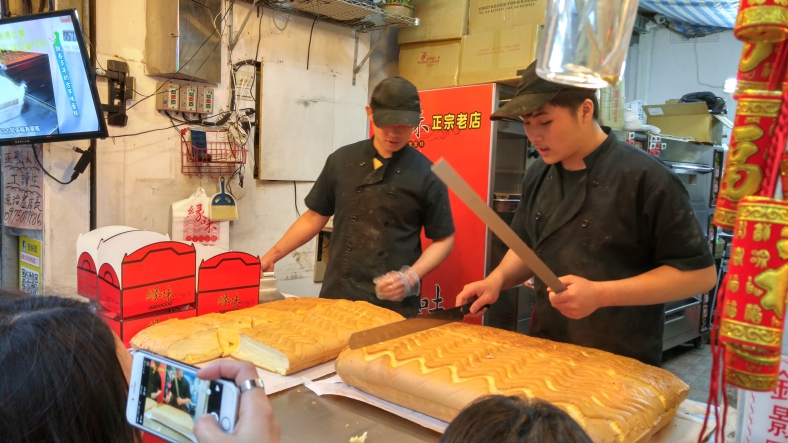 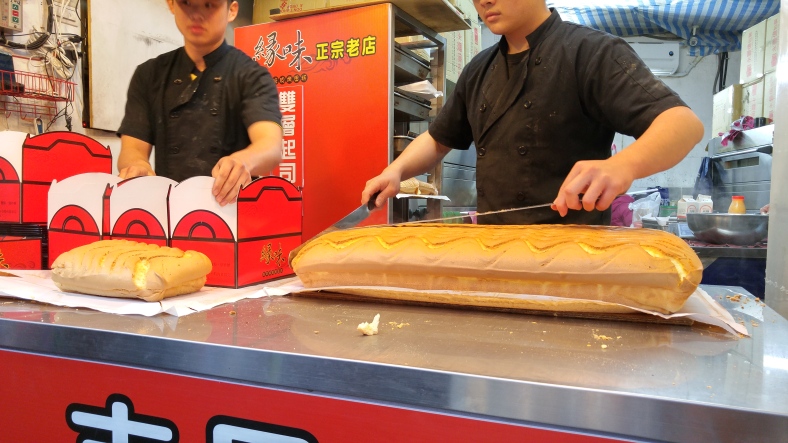 The sponge is also ridiculously cheap. For a portion the size of a brick slab, it only cost us around $25 HKD (just over £2) and only a little more for the cheese one.

We ended up going for original as it was a longer wait for the cheese one, but oh man, it was SO GOOD! 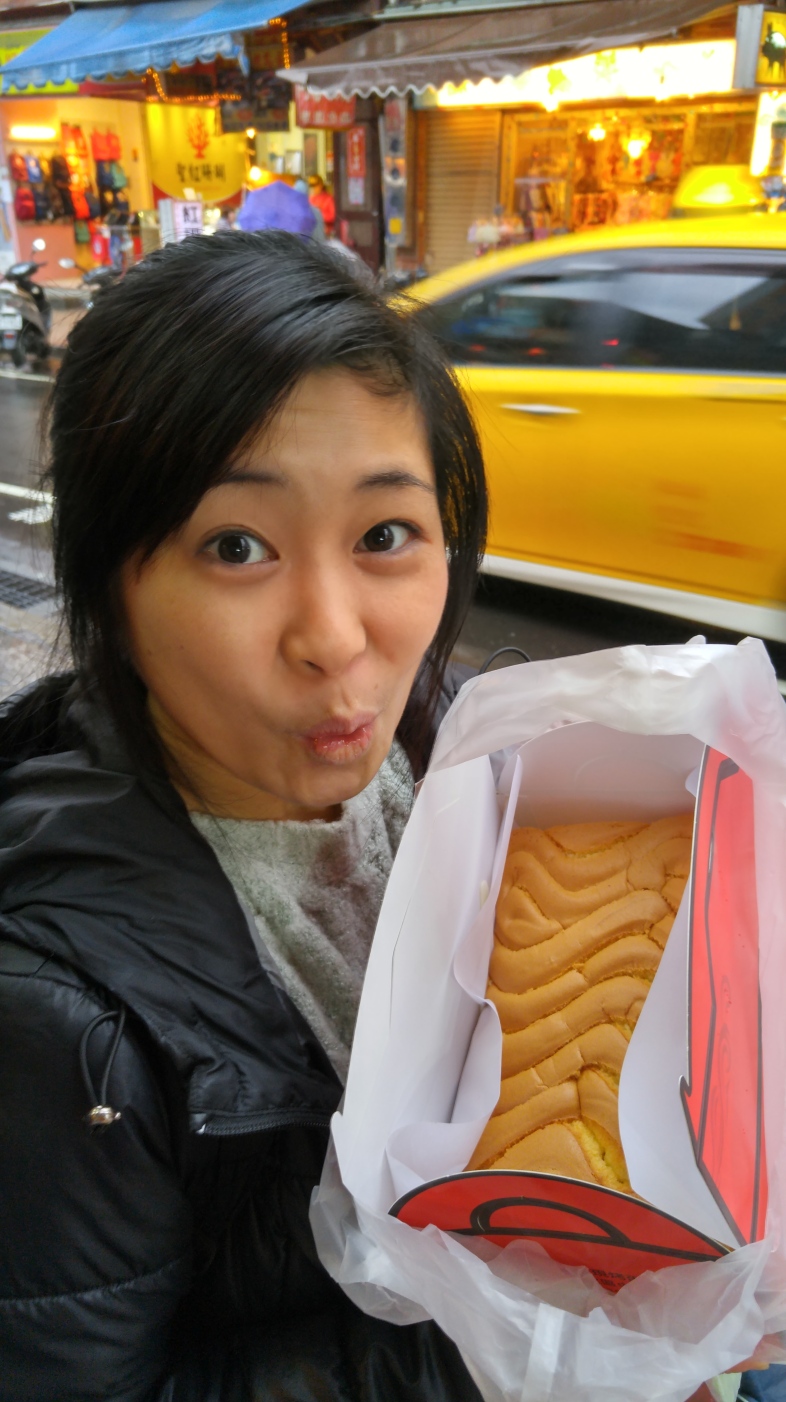 We devoured it in huge bites while it was still hot and saved some for our breakfasts for the rest of the trip.

It lasted us 2 mornings, so the queue was totally worth it 😉

If you’re in the area, definitely go and check it out: